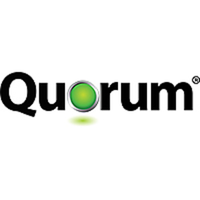 Quorum is a fully bootstrapped 75-person startup based in Washington DC that builds software for public and government affairs. Thousands of public affairs professionals use Quorum for their work in Congress, all 50 state legislatures, major U.S. cities, and the European Union.
Called "The Moneyball Effect on K Street" by the Washington Post and "Google for Congress" by the Huffington Post, Quorum's software is used by four of the top 5 tech companies, major companies like Walmart, Coca-Cola, and Toyota, non-profits like the Sierra Club and the United Nation Foundation, and many other companies, trade associations, non-profits, and advocacy groups.
Our engineers work the full stack using tools like React/Redux, Django, PostgreSQL, React Native, and much more (though no experience with our exact stack is required and we're dedicated to investing in engineers early in their careers). We're rapidly scaling our engineering team and have multiple roles available. Apply at https://grnh.se/4fea05fa1

Never miss out on full-stack jobs

You'll be able to customize your job subscription by remote/onsite, search, location and more... Subscribe